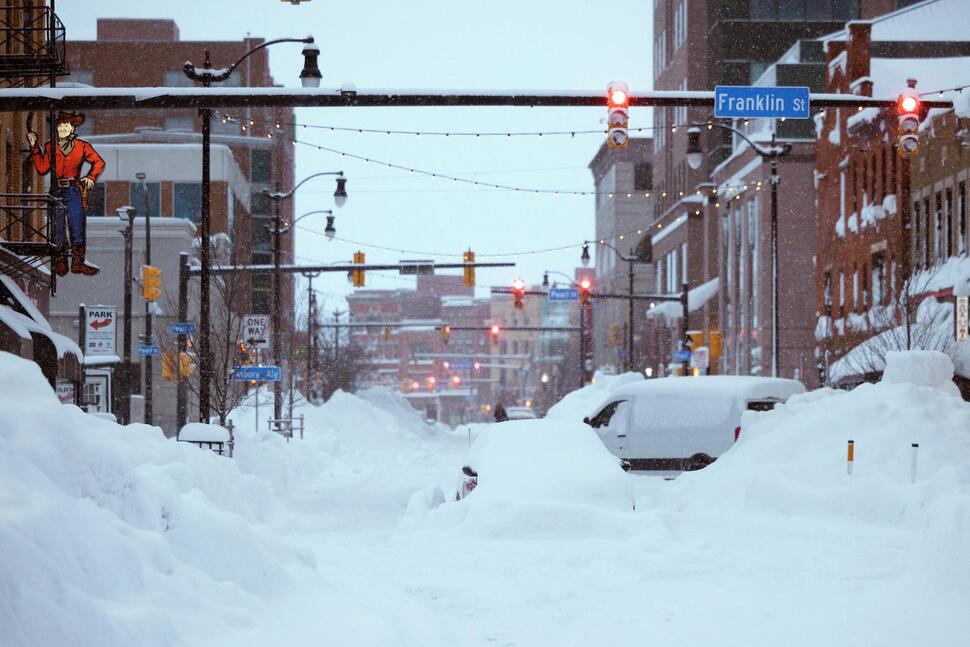 The pre-Christmas blizzard that had paralyzed the Buffalo area in New York and a lot of other portions in the country has finally reached up to 28 in western New York. The authorities had said that the area witnessed one of the worst weather-related disasters on Monday. The blizzard finally roared through western New York on Friday and Saturday. New York Gov Kathy Hochul had passed a vehicle ban to avoid mishaps. Power outages and other emergencies, such as stuck cars and frigid homes, were quite common!

The rest of the US was reeling from the ferociousness of the winter storm, with around two dozen deaths reported in different parts of the nation. According to the National Weather Service, 9 inches of snow, approximately 23 centimetres, fell in areas of western New York through Tuesday. Erie County Executive Mark Poloncarz, calling the blizzard, said, “This is not the end yet.” He added, “the worst storm probably in our lifetime.” President Joe Biden said that his prayers are with the victims’ families, and they should be offered federal assistance on Monday to the hard-hit state.

Dead bodies were found in homes, snowbanks and cars amidst the snow.

People who died were either found in the snowbanks, homes and cars. Emergency crews could not respond to all the emergency crises on time. Melissa Carrick, a doula, said that the situation left her with no choice but to coach a pregnant client through childbirth via phone. She said, “In any other normal Buffalo storm? I would go because that’s what you do – just drive through the snow. But you knew this was different.” A meteorologist finally revealed that you could expect relief later this week.

Liberty Coca-Cola Beverages, LLC filed a Workers Adjustment and Retraining Notification with the New York State Department of Labor on January 19. The notice indicates the company will potentially close its Maspeth distributing center at 59-02 Borden Avenue on April 30.

Acting U.S. Attorney Stephen M. Schenning announced Tuesday a Montgomery County, Maryland man was sentenced to 39 months in prison for aggravated identity theft and bank fraud. Fifty-year-old Warren Moon convinced his victims to refinance their home loans, by representing himself as a loan officer. Moon received more than $300,000 from one victim, who believed…

Rise Biscuits Donuts, a North Carolina-based restaurant chain, announces the opening of a new location in Lutherville-Timonium in November. The new 1,800-square-foot restaurant at 1620 York Road will open daily from 7 a.m. to 2 p.m. The plan includes opening four locations in Maryland in the next three years. The breakfast and lunch menus will…

Two people approached a security guard patrolling Delaware’s Dewey Beach around 3 a.m. on Monday morning, requesting a ride to Ocean City. The security guard offered to call Julia C. Price, 21, of Baltimore and John P. Clancy, 21, of Towson a taxi, before they attacked him. Price and Clancy were charged with second-degree conspiracy,…