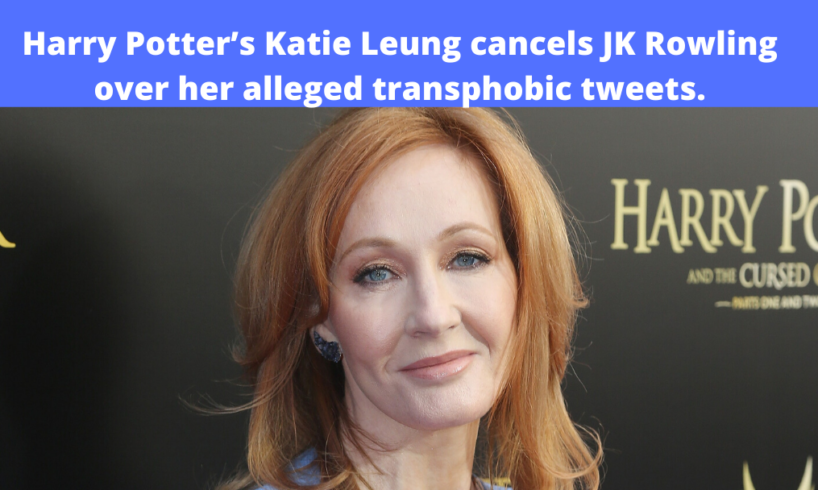 Harry Potter’s Katie Leung cancels JK Rowling over her alleged transphobic tweets.
Social media has become nothing less than a controversy nowadays. A single tweet or post form someone and it is followed by a series of comments whether good or bad, in favor or against. In recent times US got united over #BLACK LIVES MATTER. As we see it is followed by most of the celebrities and common people.

JK Rowling has created a controversy about transphobia after her series of tweets in recent times. Within a no time people reacted and took it in different ways following which Harry Potter’s Cho Chang AKA Katie Leung put forward her tweet but her tweet was a bit different which proved she was a true Ravenclaw. She canceled author JK Rowling over her alleged transphobic tweets without even mentioning her. The author of the great series even had face flak for naming her Asian character as Cho Chang since they were both last names and the name was perceived to b racist. People always wait for such controversies to happen and as soon as all this happened, fans asked Cho Chang to respond. And she responded in a very meaningful way using #Asians for black lives, not even mentioning the author’s name. Fans nowadays are very much enthusiastic about celebrities. They came out in support of her. One of her fans mentioned “ Did she – she really canceled JK Rowling without even talking about her? That’s such a Ravenclaw thing to do! Cho Chang would be proud.

Another fan wrote,” Katie really went Avada Kedavra on racism and transphobia”. Tweets by the author have hurt the emotions and sentiments of her fans and even those who have been a fan of her series in spite of being transgender. Fans then thanked Katie for speaking out her thoughts in the coolest way possible.

The author, in the beginning, shared an article headed Opinion: Creating a more equal post- COVID-19 world for people who menstruate, and this tweet was also mentioned in series. People felt that her tweets were insensitive towards the trans community and that she had hurt the sentiments, she then shared the other tweets which became nothing but a controversy for the author as her statements were taken in different ways.

In the end, JK Rowling twitter “ I respect every trans person’s right to live any way that feels authentic and comfortable to them. I’d march with you if you were discriminated against on the basis of being trans. At the same time, my life has been shaped by being female. I do not believe it’s to say so”.

The author’s tweet showed that her intentions were a bit different than they were taken and that maybe she was misunderstood.

And as we say “ The single biggest problem in communication is the illusion that it has taken place”.