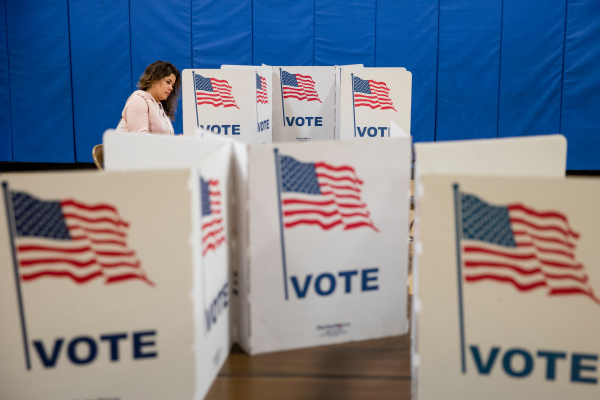 Polls closed in the U.S. presidential election on Tuesday without any significant or disruptive cyberattacks, according to cybersecurity officials and experts.
Election Day wasn’t without its problems. Some voting machines in Nevada and Texas went down but were quickly back up and running, some voters in Georgia and Ohio had to use paper ballots after hand sanitizer leaked into the machines and the FBI said it was aware of robocalls urging Americans in swing states to “stay safe and stay home.” And delays in the postal system and rules that meant no ballots could be counted until Election Day left a backlog of votes still to be counted long after the polls closed.
Homeland Security’s Cybersecurity and Infrastructure Security Agency (CISA), which oversees the security of U.S. elections, said Election Day went by largely without a hitch.
“What we’ve seen today is just another Tuesday on the internet,” said a senior CISA official on a call with reporters later on Tuesday. But the official admitted that “we’re not out of the woods yet,” pointing to the reporting of final vote counts, with many state election results balancing on a knife edge.
Data published by Cloudflare suggested a slight uptick in cyberattacks on government election websites on Election Day, but chief executive Matthew Prince tweeted that the rise was “relatively small” and the attacks “unsophisticated.”

In an email after the polls closed, Prince told TechCrunch: “Both Internet traffic and attack traffic to election websites spiked at times on election day, as anticipated. We don’t see everything, but again, there have been no reports of any cyberattacks that threatened the integrity of election websites or infrastructure.”
It’s a world away from the 2016 election, which saw Russian-backed misinformation actors swamp social media sites with false information and engaging in “hack-and-leak” operations, including documents and emails from Hillary Clinton’s presidential campaign and the Democratic National Committee. Since then, the government spent billions in preparedness efforts ahead of the 2018 midterm elections, which Homeland Security saw no evidence of vote hacking or manipulation, as well as the creation of CISA to improve election security and infrastructure across the United States.
NSA director Gen. Paul Nakasone, who also oversees the government’s offensive cyber division Cyber Command, said that the government “will maintain constant vigilance” and stands ready to help Homeland Security and the FBI to “provide information to social media platforms to counteract influence operations.”
“Foreign adversaries continue to see an opportunity to undermine our nation’s elections,” said Nakasone. “However, we have the capability, capacity, and will to prevent any type of interference or influence in our elections. I’m confident the actions we’ve taken against adversaries over the past several weeks and months have ensured they’re not going to interfere in our elections. When it comes to those who threaten our democratic processes, we are equal opportunity disruptors. We’re going to take action against any nation state or actor who attempts to interfere in our elections.”
It was widely anticipated that the vote count would extend into the week, with swing states Pennsylvania and North Carolina still accepting and counting postal votes. But without a clear winner on the day — which Americans have largely become accustomed to — all eyes and efforts are on combating the spread of misinformation, including false claims of a presidential win.
Much of the effort to filter misinformation has come from the social networks directly. Facebook and Twitter came under fire for failing to curb the spread of wrong and deliberately false information spread on their platforms during the 2016 election.
But this time around, the social networks claim to be better prepared.
President Trump’s first tweet of the day on Wednesday was blocked by Twitter after the Republican presidential incumbent claimed the Democrats were “trying to steal” the election by fighting efforts by the Trump campaign for states to stop counting ballots after Election Day. Some states, like Michigan and Pennsylvania, weren’t allowed to start counting ballots until Election Day itself. Unsurprisingly, given the pandemic-driven rise in mail-in voting and increased voter turnout, the final results are likely to take time.
Anticipating that there would be no clear winner on Election Day, Twitter put in new rules in September ahead of the election to remove or attach a warning label to any claims of an election victory prior to the results being officially announced.
Facebook and Instagram have also issued warnings advising voters that results may take time and a winner has “not been projected yet,” in an effort to counter unverified claims of a final winner.